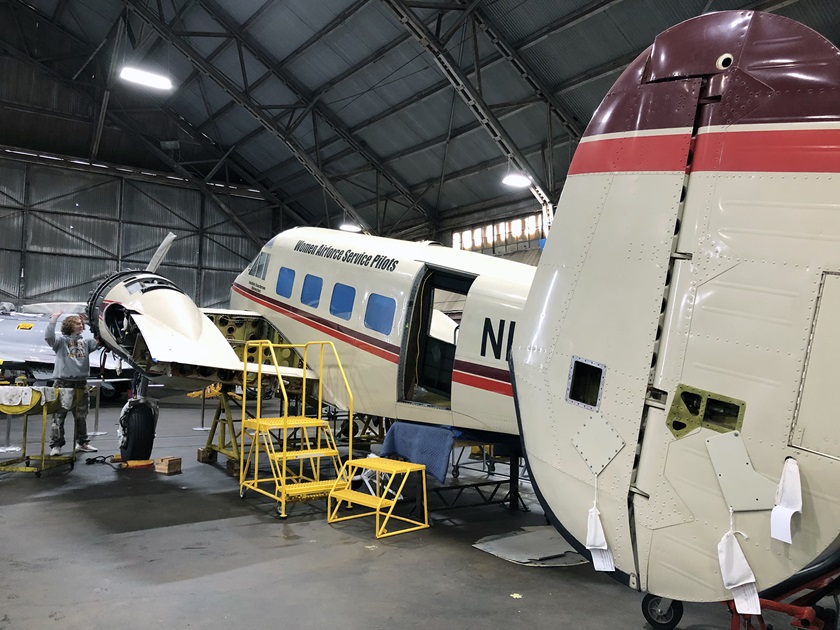 A quartet of volunteers attended to the nose section on the museum’s Douglas A–26K, a rare modified version of the Douglas A–26 Invader, a twin-engine light bomber and ground attack aircraft built during World War II.

A duo was working on the right engine of a Beechcraft Model E18S-9700, Serial Number BA-31 N13JC, also known as Jacqueline Cochran’s Beech 18.

We stopped to read the displays near the airplane, one highlighting Cochran’s flying career and another chronicling the timeline of the Women Airforce Service Pilots. In 1940, Cochran wrote to First Lady Eleanor Roosevelt with the idea to start a women’s flying division within the Army Air Forces. It took a few years but by 1943, spurred by the U.S. entry into World War II, the WASP organization was formed. Cochran is credited with supervising the training of more than 1,000 women, many of whom performed distinguished service flying experimental military airplanes.

Curt Landrum stopped his work on the Twin Beech to tell us more about how the airplane landed at the Vintage Flying Museum. It wasn’t until the aircraft was donated to Tarrant County College, where it was used as a training aid in the college’s aviation maintenance courses, that someone researched its ownership and made the famous connection. 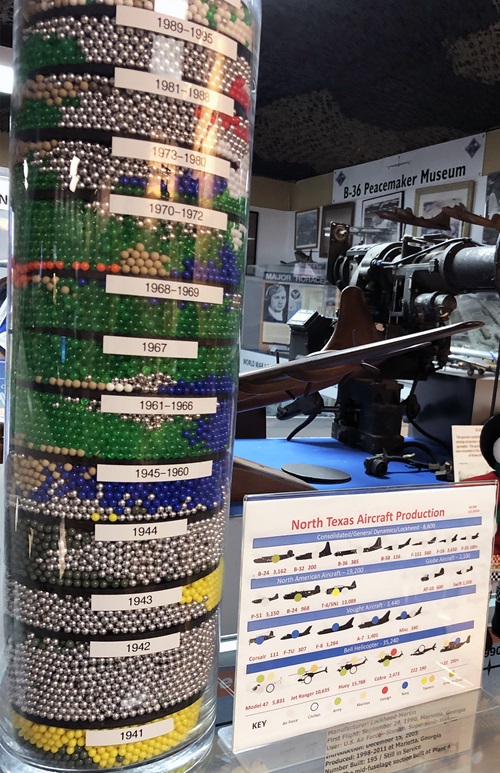 The restoration needs more volunteers and more funding, Landrum said, and will take several more years to complete. The museum’s goal is to get it airworthy in order to more widely share the story of an aviator who achieved many firsts.

“Our whole mission is to keep history alive,” said Chuckie Hospers, executive director of the Vintage Flying Museum that she started with her late husband in 1990.

These aircraft are among at least 25 on display in a World War II B–29 hangar at Fort Worth Meacham International Airport. Also on display: a large collection of reciprocal and jet engines and artifact and memorabilia collections ranging from World War I through the Vietnam era.

Just a half a mile away and sharing the southeast side of the airport is the Fort Worth Aviation Museum. There are another 25 or so aircraft here, part of an outdoor static display that the staff calls its petting zoo (they believe they have the most touchable warbirds in Texas). Indoor displays tell the aviation history of North Texas, from the first powered flight in the city in 1911 to becoming the headquarters of American Airlines and Bell Textron, and the build site of Lockheed Martin’s F–35 stealth aircraft. The museum also houses the Forward Air Controllers’ Museum, the B–36 Peacemaker Museum, and the OV–10 Bronco Museum.

If aviation history is all you’re after, you don’t even need to leave the airport. But you’d be missing out on a lot more history and culture that is a short drive away.

To explore more museums, head 5 miles south of the airport to the Fort Worth Cultural District. The Amon Carter Museum of American Art, Kimbell Art Museum, Modern Art Museum of Fort Worth, Fort Worth Museum of Science and History, and National Cowgirl Museum and Hall of Fame are all within walking distance of one another. 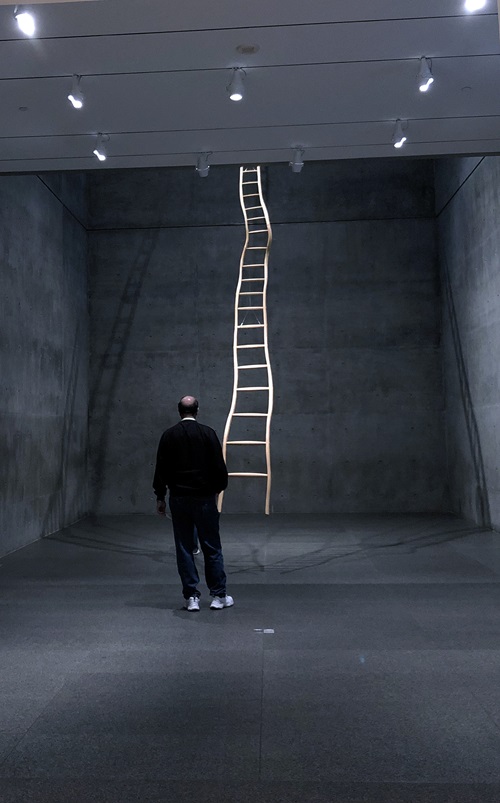 I visited all three art museums during my stay, admiring the architecture of each building before exploring their collections. I appreciated the variety of the art—from Michelangelo’s first known painting at the Kimbell Art Museum to the landscape photographs at the Amon Carter Museum of American Art and the thought-provoking sculptures at the Modern Art Museum of Fort Worth.

My favorite of this museum cluster, though, was the only museum in the world dedicated to honoring the pioneering spirit of women who helped shape the American West. Don’t miss the series of short movies; they set the stage for the rest of what you’ll see at the National Cowgirl Museum and Hall of Fame. I designed a pair of boots and tested my bronc riding skills at interactive exhibits; I also learned about the special bond among the horse, women, and the West through the “It’s Never Just a Horse” gallery of memorabilia.

Just 2 miles east of the Cultural District is Fort Worth’s downtown. There we had dinner of tenderloin tamales and charbroiled ribeye at the legendary Reata Fort Worth, a concept started by a West Texas rancher and brought to Fort Worth’s Sundance Square. We walked off dinner by covering much of downtown’s 35 square blocks of businesses, shops, galleries, and entertainment venues.

One of our favorite stops along our walk back to our room at the Omni Fort Worth Hotel was the Fort Worth Water Gardens with its three pools of water: the aerating, the quiet, and the active pool.

Also along our walk we came across a series of Heritage Trail Markers detailing some of the city’s historic events, from a JFK bronze marker commemorating the site of President John F. Kennedy’s visit to give a speech the morning of his 1963 assassination in Dallas to a Chisholm Trail mural depicting Fort Worth’s historic cattle drives of the nineteenth century. 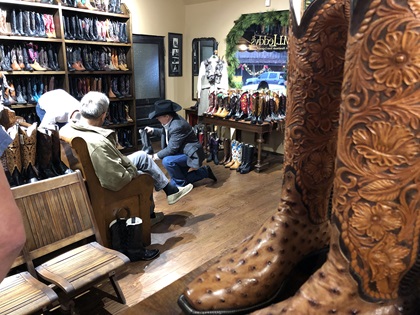 We weren’t able to catch live music at Billy Bob’s Texas, but we did go inside the “world’s largest honky-tonk” and saw the wall of autographs and handprints from some of the big names to play here over the past three decades. The space is massive (127,000 square feet) and was built in 1910 as a cattle barn for the Fort Worth Stock Show & Rodeo.

The old sheep and hog barns are now shops and restaurants, and the Livestock Exchange Building has a historical museum. But the main attraction for visitors is to see the Texas Longhorns. We weren’t the only visitors to time our arrival to see the Fort Worth Herd cattle drive; by 3:45 p.m. the area had already started to look like a parade route with people lining the road two and three rows deep. Twice daily, at 11:30 a.m. and 4 p.m., genuine Texas cowhands drive a small herd down the street that minutes before vehicles were traveling.

Thu Aug 26 , 2021
SELLERSBURG — A Sellersburg artwork truthful that includes artists from around the region will current its 30th and remaining event this weekend. Artwork in Velocity Park will acquire location this Saturday and Sunday from 10 a.m. to 5 p.m. in Velocity Park at 175 Indiana Ave. The celebration started off […]