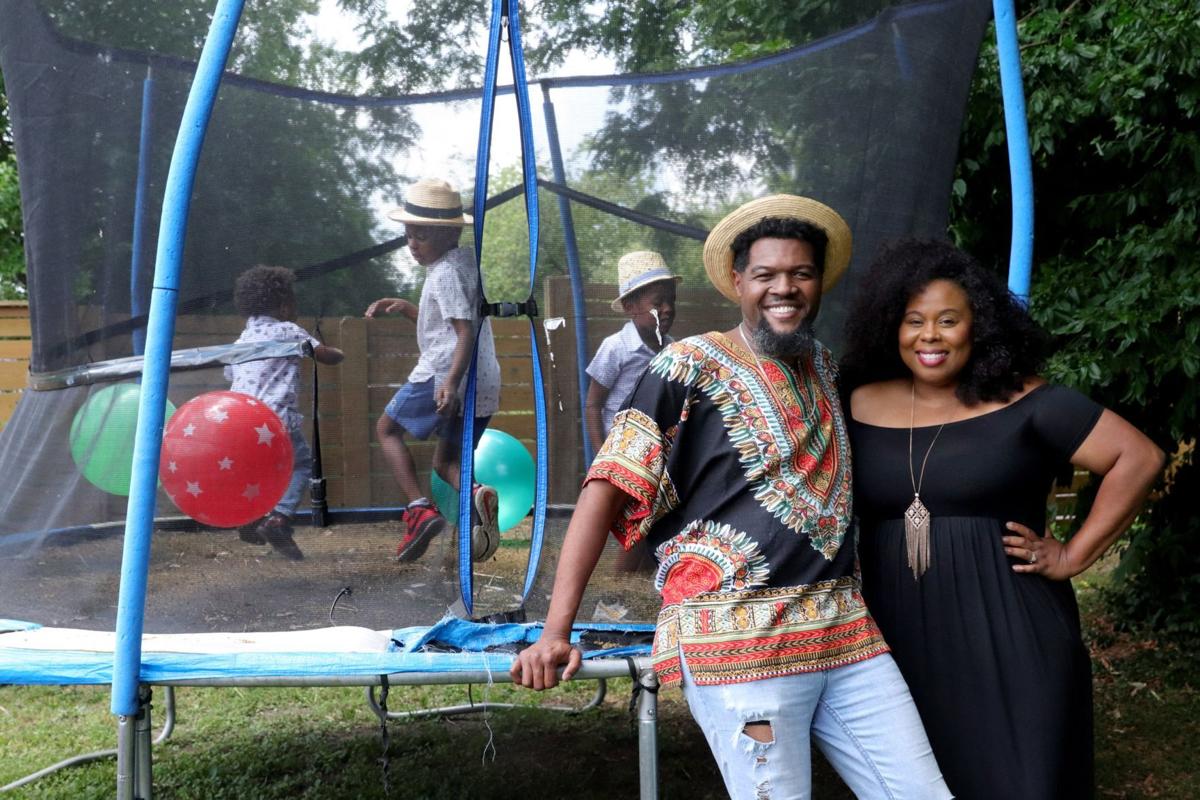 Kenny and Christia DeShields pose in the backyard of the Central West End home. Their 3 boys play behind them on the trampoline, Thursday, June 10, 2021. Photo by Hillary Levin, [email protected] 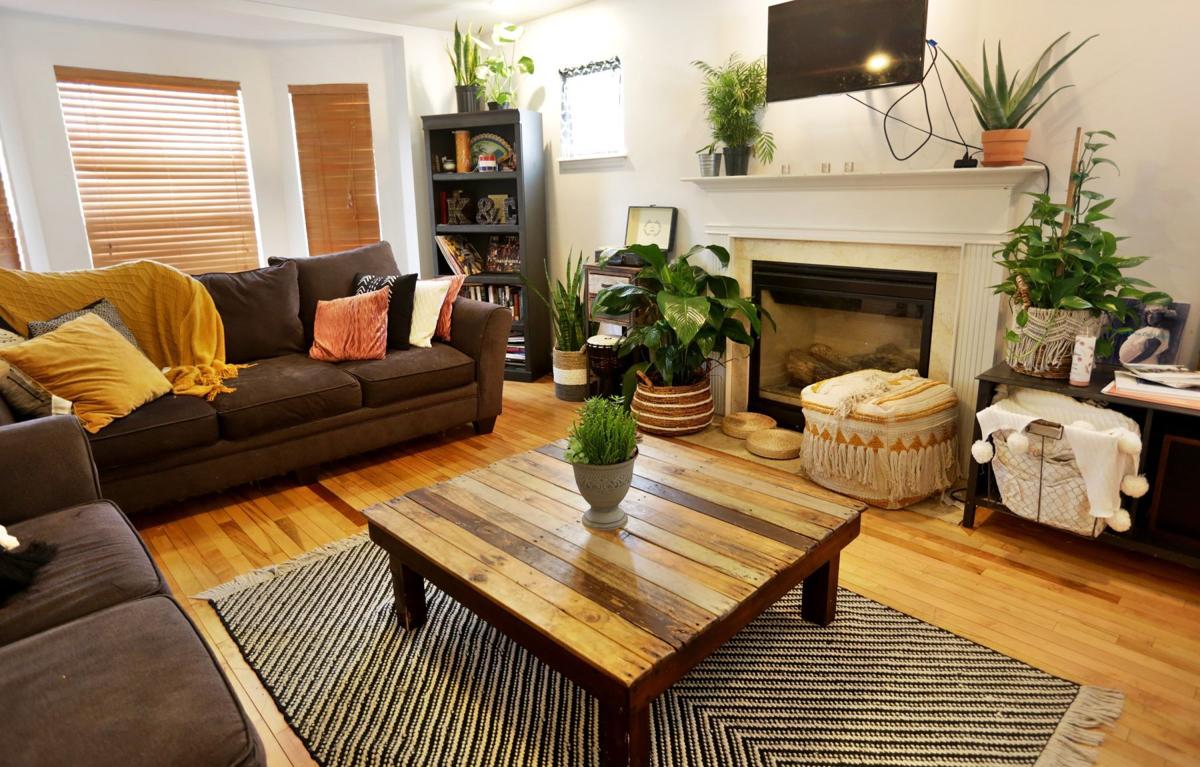 Christia’s boho Morrocan vibe incorporates acquisitions from her travels on mission trips and from her studies abroad. The entire family enjoys playing records on the old-fashioned record player. “It was one of Kenny’s birthday presents two years ago — on June 20. He and I like to play chill-hop low-fi music on it,” Christia says. 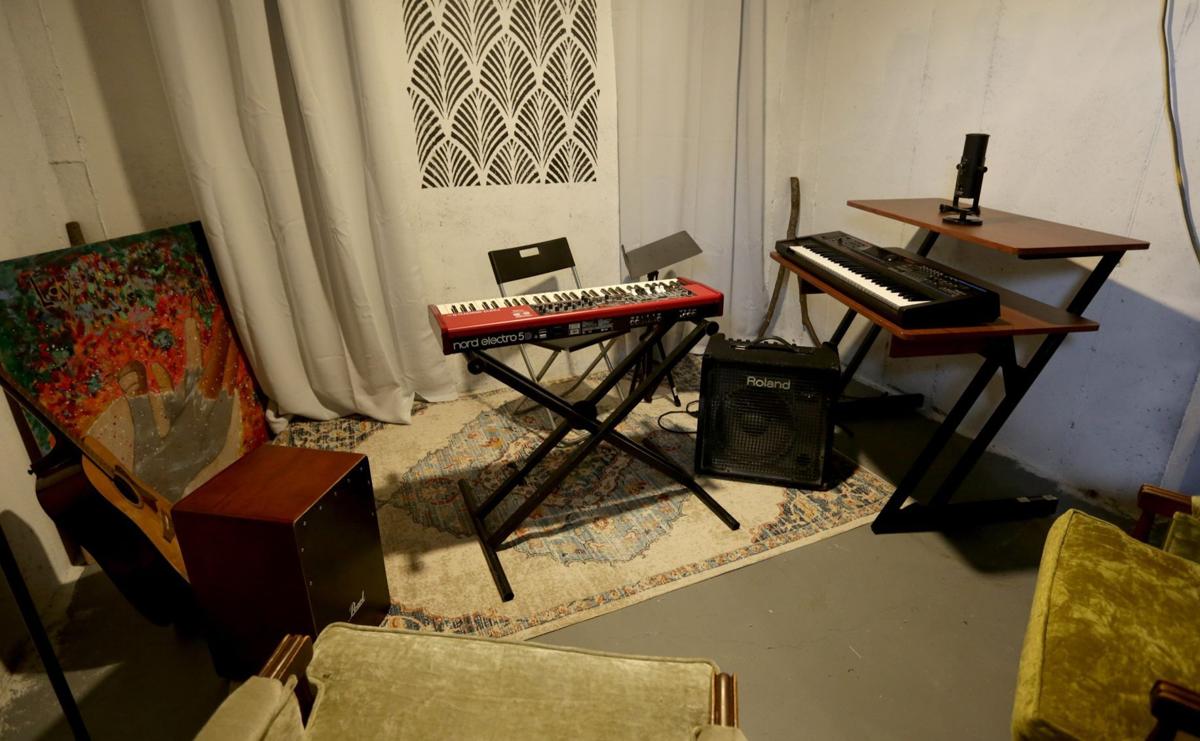 A view of the lower level music room. Although they are not formally trained yet, Shiloh acts as producer, Hugo wants to play drums, and Tiago, the showman, sings and plays “the microphone!” when the boys make music together. 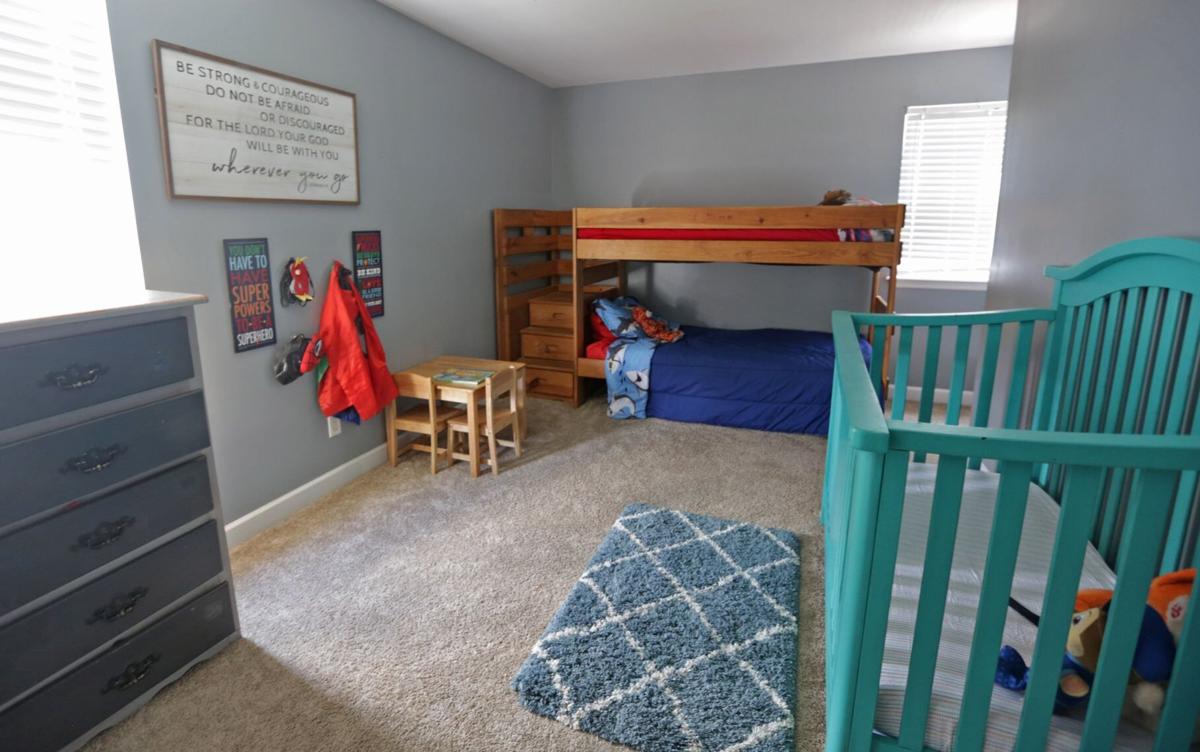 The boys’ room features the aqua crib used by all three boys, painted by friends of the family. During the pandemic, Tiago and Shiloh got to pick their own bed coverings. Shiloh chose blue, Tiago “Spiderman” red. 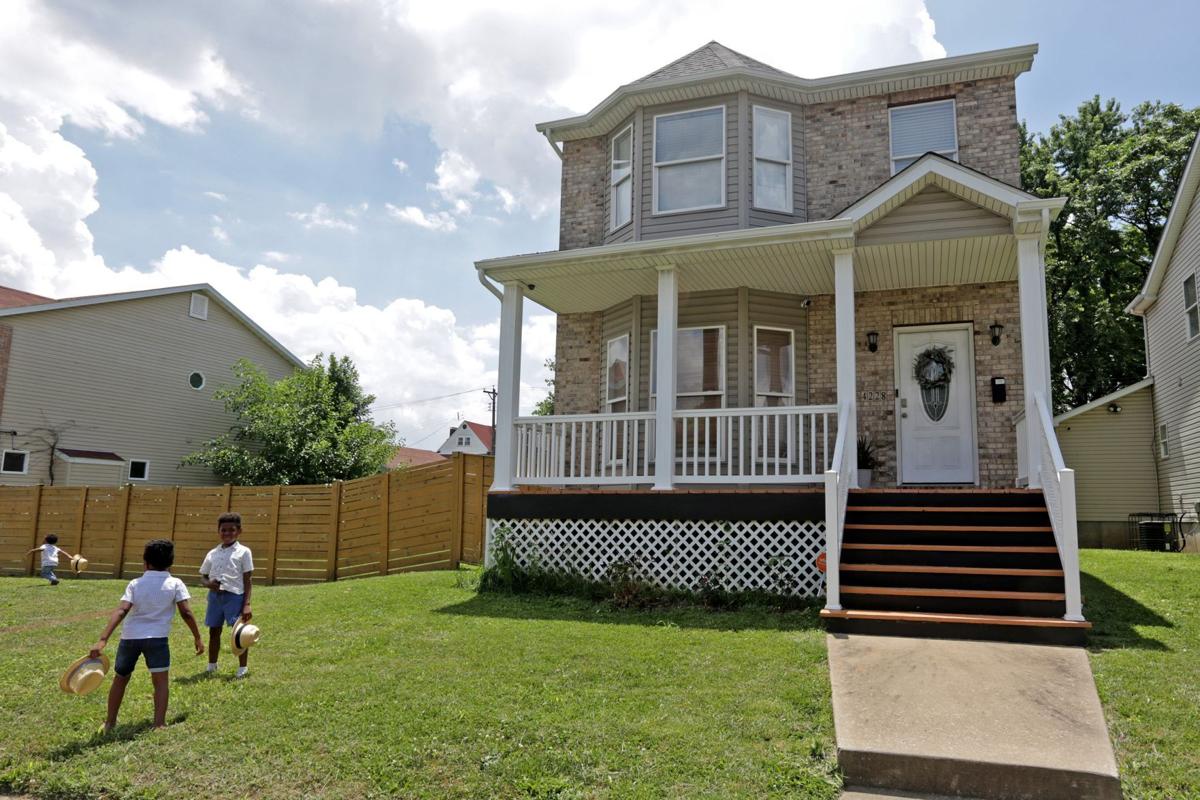 Shiloh, Tiago, and Hugo run and play in the front yard of the DeShields’ Central West End home. 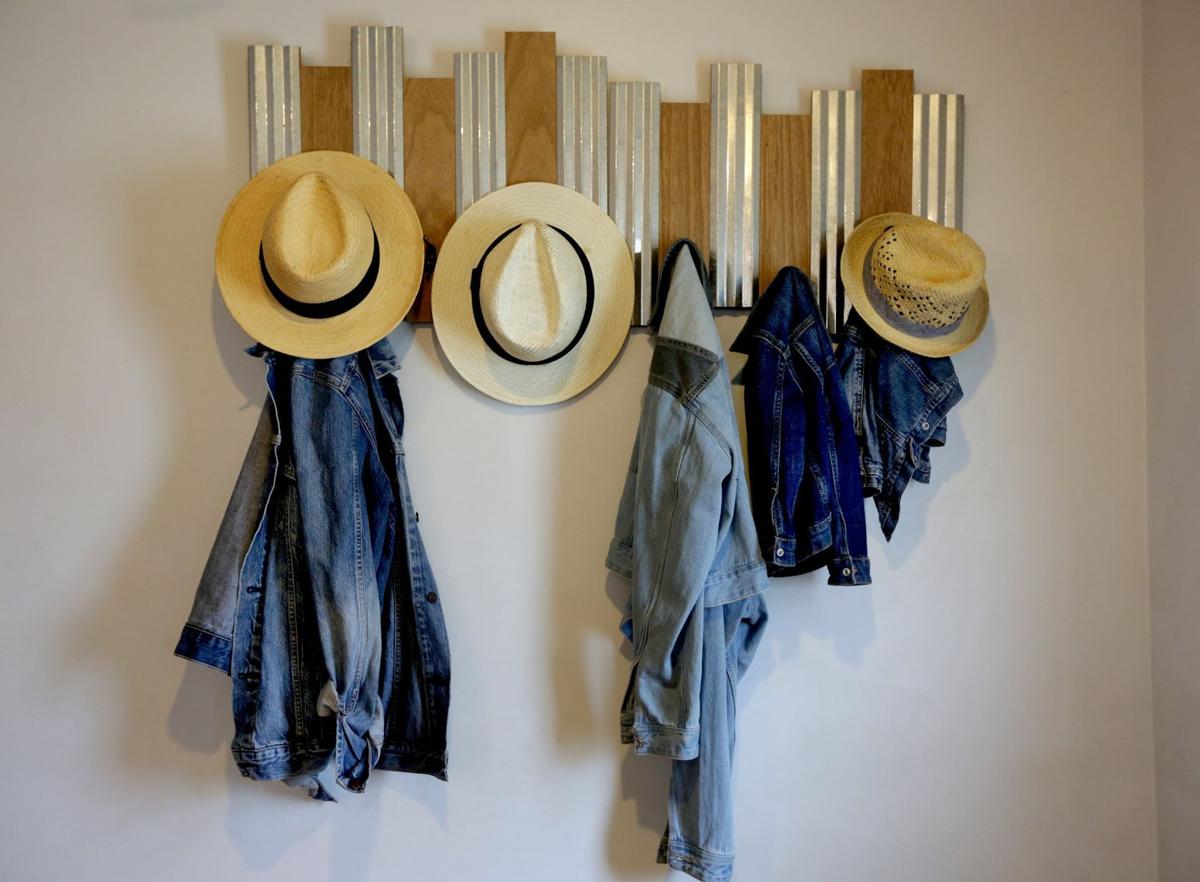 Straw hats and denim jackets hang in the front hallway on an industrial chic rack of galvanized tin and wood. “Christa is our stylist. She keeps us all looking good,” Kenny says. 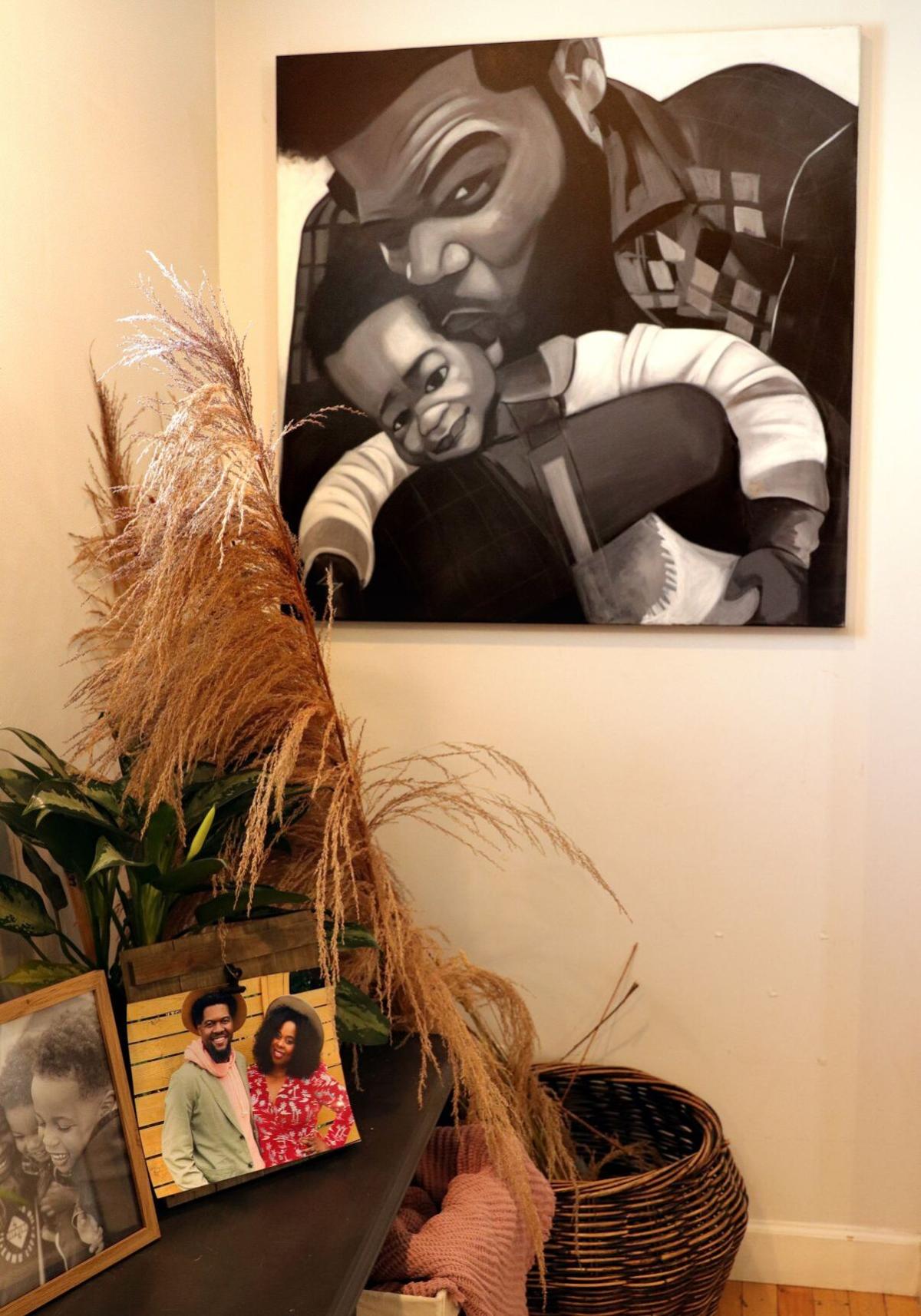 Cbabi Bayoc’s portrait of Kenny was soon after he became a dad for the first time. 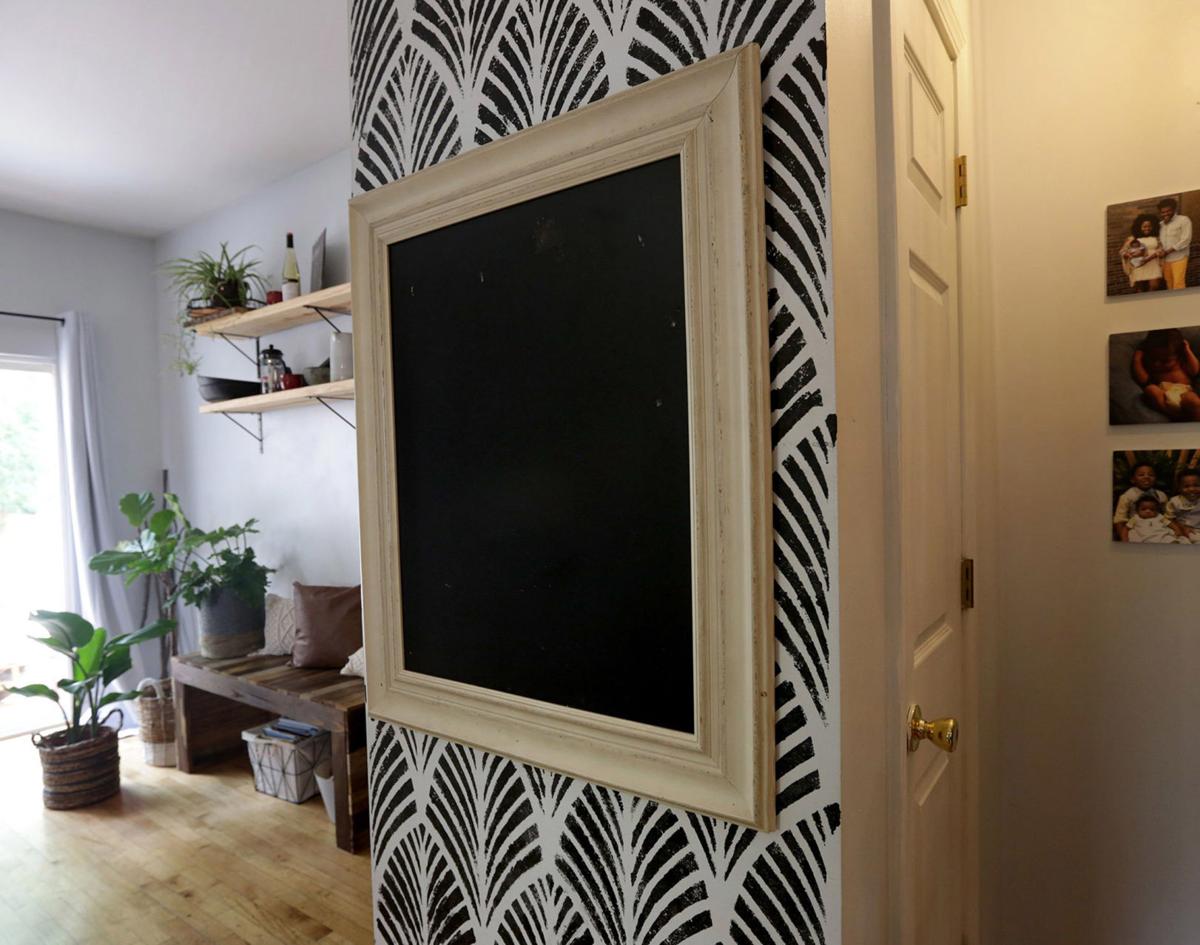 Christa’s strong navy and white stencil design, reminiscent of Gothic church windows and arches, appears on all three floors of the house, a unifying symbol.

By Pat Eby Special to the Post-Dispatch

Seven years ago Kenny and Christia DeShields found the perfect home for them and their 6-week-old son, Shiloh. “When our Realtor showed us this house, we knew it was the place,” Christia DeShields says. “Originally, we didn’t own the lot next door. The woman who owned it wouldn’t sell to us.”

The vacant lot, overgrown with brush and studded rubble, sat next to their neat home. For two years, the DeShieldses worked to acquire it. “We had dreams to hold worship there, and to have a place for our boys to run around,” Kenny DeShields says. “A group of good friends gathered in our living room one evening. We all prayed about the situation. We faced the lot, extended our hands and prayed. Soon afterward, the woman sold it to us.”

The transformed lot delivered on its promise. It’s now a space where a garden grows, where friends meet in fellowship, where the DeShieldses share their stories in ministry and where three little boys roam with abandon.

The welcoming house provides this active Christian family space to love, live, worship, work and play. Like many, the pandemic year allowed the couple to slow down, focus and reshape their lives. For the couple, key collaborations brought two projects close to their hearts to completion.

The prayed-for side lot took nearly three years to transform into a grassy open space, but the focal point for the kids, the swing set and the tree house, came together quickly.