They say beauty is in the eye of the beholder – that the perception of beauty is subjective and what one person finds attractive another may not. But when you get to use the most loved colour combination in motorsport – Gulf Racing blue and orange – is it possible to design a livery that pleases everyone and how do you go about doing it? Now the covers have come off our special livery celebrating McLaren Racing and Gulf Oil International’s historic partnership, we thought we’d find out, before it takes to the track at the Monaco Grand Prix.

So, can you really design a livery that appeals to everyone? “The short answer is ‘no’,” says Ed Sullivan, Director, Creative, McLaren Racing. “You will never please everyone. It’s impossible to be all things to all people, but we understand our fans well enough to know what appeals to them. The Gulf livery we have designed reflects that.”

“Almost every car that carries the Gulf colours instantly achieves iconic status,” says Louise McEwen, Director, Brand, McLaren Racing. “The livery is one of the most admired in motorsport: it really resonates with fans. When we announced our partnership with Gulf Oil International in July last year, fans immediately began to share their ideas of what a Gulf-liveried McLaren Formula 1 car could look like. We didn’t ask them to do that, they just did it. That really underlines how much this livery has captured public imagination.”

By carrying the iconic Gulf colours, the MCL35M follows in the wheel tracks of the McLaren F1 GTR, Ford GT40 and Porsche 917K – just some of the race-winning machines that have shaped the public’s love affair with the Gulf livery, along with the ‘King of Cool’ Steve McQueen, who drove the latter in the film Le Mans. With this history comes a weight of expectation and responsibility on the shoulders of those tasked with designing the latest incarnation of the livery. “As is this case with any livery, you want to make sure it’s a well-informed and well-executed design,” explains Ed. “To achieve that takes plenty of research and due diligence: you try to take on board all the history and understand the desires of key stakeholders.

“For a livery like this there’s a lot to take in but it’s important not to get bogged down in the magnitude of its importance, otherwise you won’t produce anything worthwhile. You can’t let its significance constantly occupy the front of your mind, you’ve got to be brave. That’s exactly what this livery is while being respectful of its heritage and cultural standing. It’s a bold evolution of what’s gone before.”

“We’ve picked up the baton and reinvented the Gulf livery for the audience of today,” says Louise. “I think I speak for everyone in the team when I say we’re honoured to have had this opportunity and we’re mindful that we’re merely the custodians of two iconic brands, McLaren and Gulf, and it’s our turn to bring them to life on the race track.”

“The Gulf colours were first put on a race car in 1967 and they were ahead of their time,” adds Gulf Oil International CEO Mike Jones. “We’re delighted with this latest, modern take on these famous colours. It’s absolutely breathtaking. We cannot wait to see this unique livery on the streets of Monaco, at the most spectacular F1 event of the year.”

One of the biggest challenges faced by an F1 team is developing a new car every year. But it’s not just a case of designing whatever you want, it’s got to be delivered within a set of boundaries such as budget, time, resource and regulations, and the same can be said of designing a livery for an F1 car. It’s as much science as it is art.  “It can’t just look good,” says Ed. “It’s got to perform and deliver in many different ways.

“We worked very closely with the aero surfaces and brand teams to optimise how we apply the livery to the car. There are areas of the car that we simply can’t touch from a performance point of view and that can be due to a number of factors, such as aerodynamic sensitivity or minimising weight.” 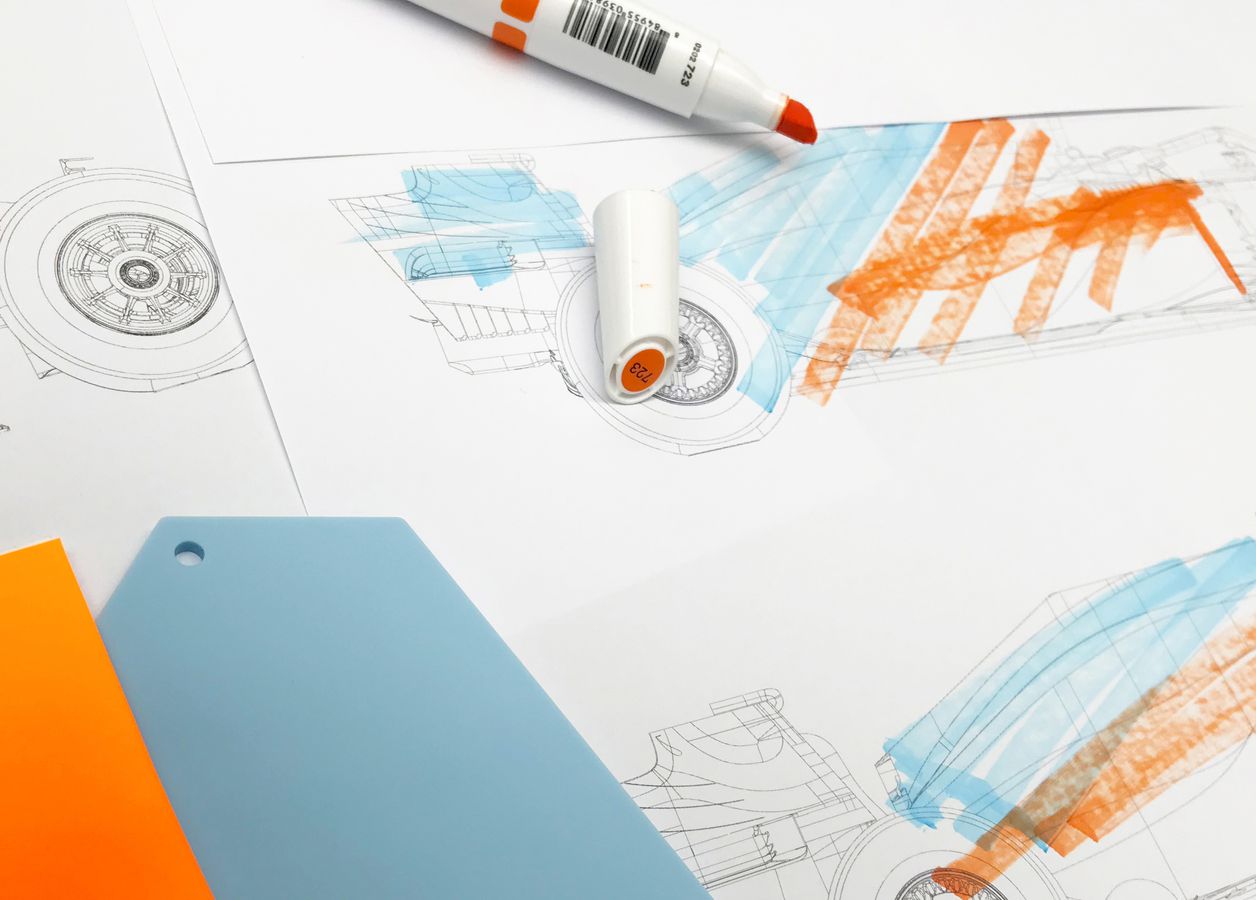 “Gulf is obviously the star of the show but this livery can’t just meet their requirements. It’s got to fulfil the needs of all our partners who are contractually entitled to their logo in a specific location and size on the car. This shapes the design, along with how it will look on track and on television. It can’t just look good on a piece of paper or a computer screen.”

“Cost is a factor too, particularly this year with the introduction of the budget cap,” reveals Louise. “It’s meant that there aren’t lots of spare parts, like front wings and rear wing elements, lying around that we can brand, which obviously limited how much testing we could do when it came to applying the livery and trying to get ahead of the game in terms of the execution of the design.”

The parallels between the design of an F1 car and the livery don’t just stop at the constraints they must be delivered within. At nine months, the lead time for this Gulf livery wasn’t far off the time the team typically takes to design and build a new F1 car from start to finish. “We started thinking about this livery almost immediately after we announced our partnership with Gulf Oil International,” says Louise.

“The idea was born in August and by September we had the first round of visuals and designs ready. Once we had presented the overall concept to [McLaren Racing CEO] Zak Brown, the executive leadership team and Gulf, and it was approved, we then started work on all the other elements that go with the livery, such as the driver overalls, team kit and merchandise range. As Ed touched on, alongside this there was a lot of work done by the aero surfaces and brand teams to inform the design further. For example, testing things like vinyl colour to see how it would look on the car in different lights and settings.” 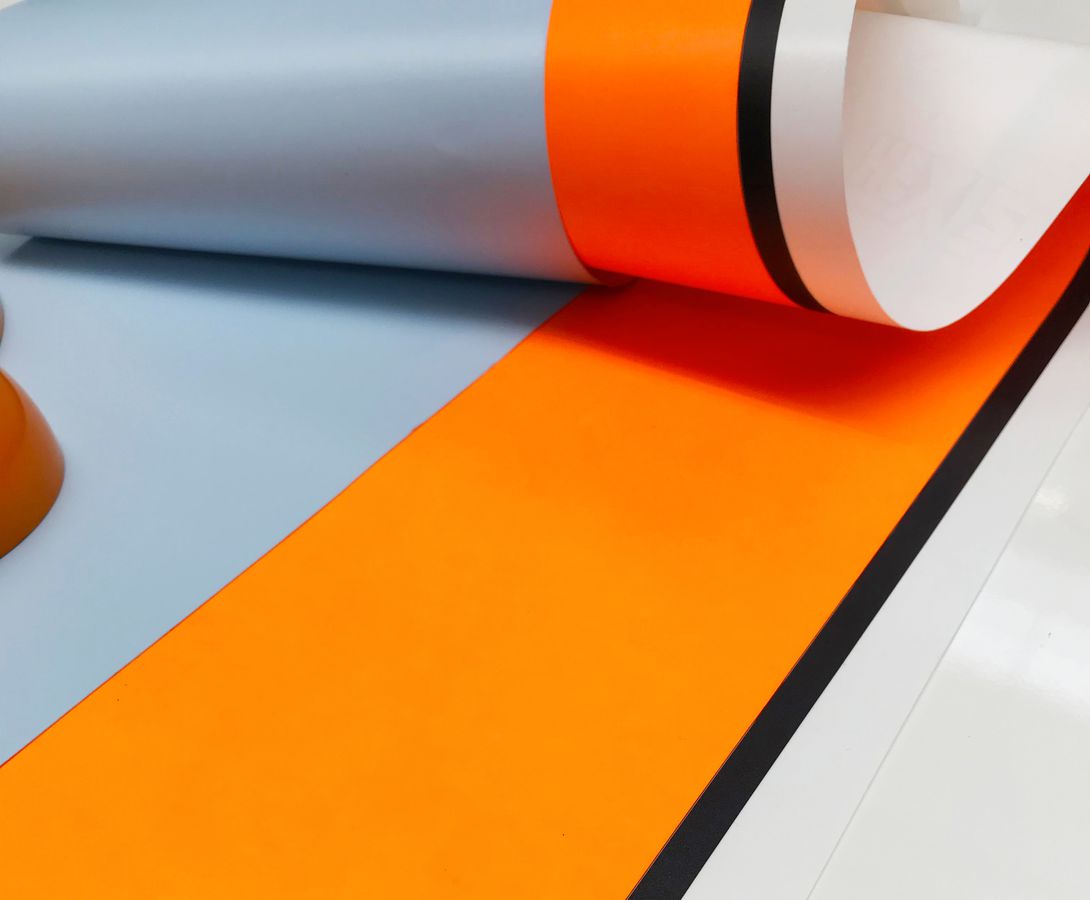 “It wasn’t until early February that the colours and design were finalised,” adds Ed. “I think it’s also important to bear in mind that we developed two designs. One is more empathetic to the heritage of the Gulf colours, while the other really breaks with convention and what the motorsport community would expect a Gulf livery to be. But, coming back to this idea of us being custodians of the brand, we went with the former: we were conscious of the fact that we needed to deliver something that lived up to the audience’s expectations rather than just rip the rulebook up. There’s a clear nod to heritage in the final design, but there’s real modernity to it too.”

“As for the colours themselves, the orange you see is not papaya, it’s fluro orange,” says Ed. “It’s the same fluro orange that featured on the McLaren F1 GTR that finished second in the 1997 Le Mans 24 Hours. That’s one of the ways the design links to the past, but it’s also for aesthetic reasons. When you lay the fluro orange next to the Gulf Racing blue, it really jumps out at you – more than if we used papaya.”

There’s science behind this too. Due to an optical phenomenon known as equiluminance, the Gulf Racing colours look like they’re moving even when the car isn’t. Equiluminant colours differ in hue but not in brightness and when they’re paired together it’s hard for the human eye to locate or fix the position of the colours. This gives the impression that the colours are vibrating or floating – and this is why the Gulf livery has a sense of energy and movement when it’s stood still. 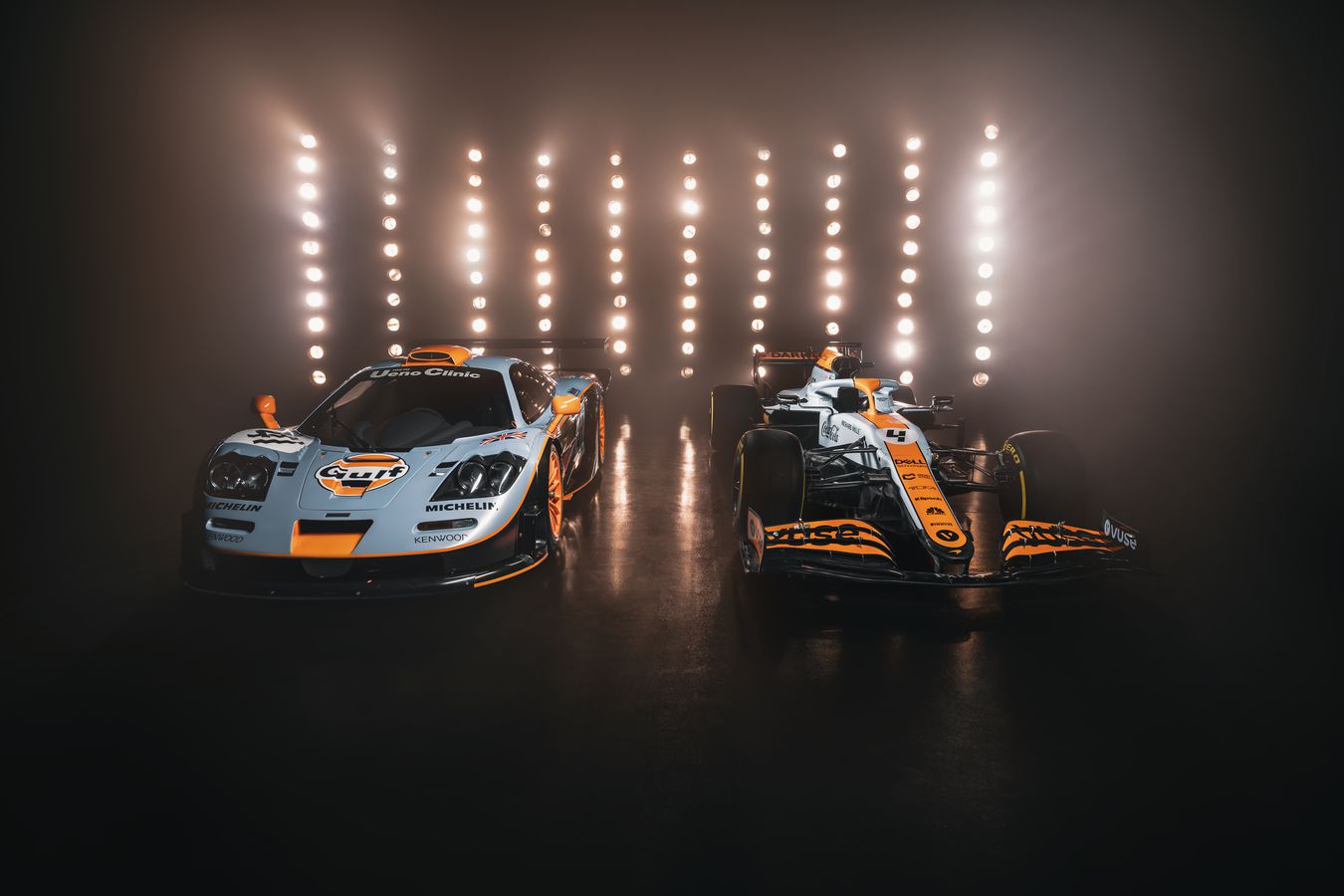 “Before this project was even on our radar, back in 2019, we actually tested the fluro orange on the car during an F1 tyre test at Paul Ricard,” says Louise. “We saw the test as an opportunity to explore the use of the colour and further our understanding of it and, crucially, that included doing a colour test on camera to make sure that what you see on TV is an accurate representation of the colour on the car. While I’m confident it will really stand out on TV, I won’t be able to relax until the car rolls out of the garage and onto the track in Monaco.

“I got goose bumps when I saw the finished livery on the actual car for the first time. That might sound a bit strange considering we design a new F1 livery every year and we’ve been working on this design for nine months, but I think it’s one of the biggest and best things we’ve done as a team in the four years I’ve been at McLaren. There’s an enormous sense of pride but also great anticipation for the fan reaction.”

“You never really know for certain how a design is going to land,” admits Ed. “There’s almost a kind of fear that comes with that, especially when you’ve tried to be bold and take things a step forward. But the fear isn’t necessarily a bad thing. It’s something you try to embrace, and it usually means what you’re working on matters to you. It’s all part of being brave, which is exactly what this design is.”

THE COMPETITION HAS NOW CLOSED

McLaren Plus is our free-to-join fan loyalty programme, bringing McLaren fans closer to the team with the most inclusive, rewarding and open-to-all fan programmes in F1 & esports.

Sign up now, or current members can amend their details in the form below if necessary.