The Decatur college for women is requiring COVID-19 vaccinations for its students, faculty and staff. The college will have an orientation for first-year students and sophomores since most of them spent the prior school year living and learning remotely.

Agnes Scott College sits on 100-acres of wooded grounds and is known for its Gothic and Victorian architecture. PHOTO CONTRIBUTED.

Agnes Scott is in the process of starting a leadership lab for graduate students that will be optional. Classes start Aug. 23.

The college has a new Student Services & Success Building to allow students to apply for admissions, financial aid, get their student identification in the same building. The college has a new articulation agreement with Georgia Military College to make it easier for students who earn associate degrees to transfer to complete their bachelor’s degree. Classes start Aug. 16.

The college is offering free tuition this fall to students who met various guidelines and filled out federal financial aid paperwork by Aug. 6. Classes start Aug. 9.

The university is home to a new effort to train aspiring leaders of historically Black colleges and universities. Atlanta Mayor Keisha Lance Bottoms is the first honorary fellow. CAU received a $1.8 million federal grant it will use to provide training in behavioral health and education to master level Counseling and Social Work students. Clark Atlanta is requiring students, employees and faculty to receive a COVID-19 vaccination to be on campus, unless they receive an exemption. Classes start Aug. 18. 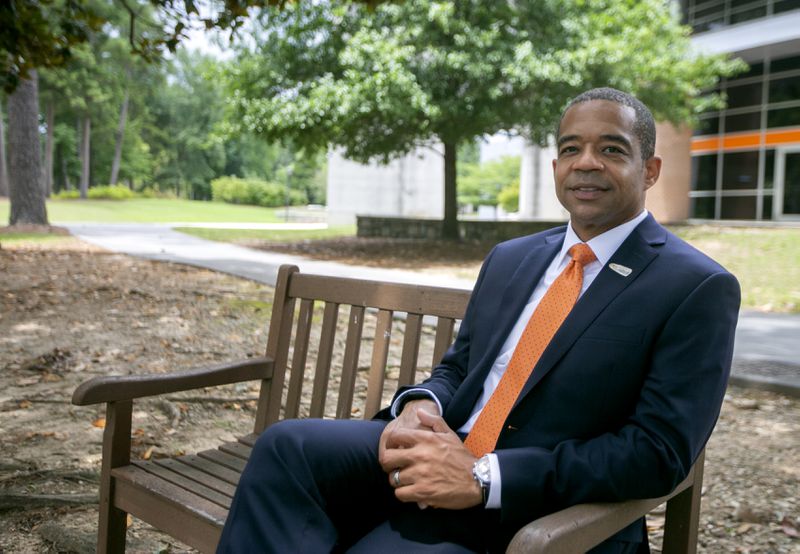 There’s a new leader on campus. T. Ramon Stuart was hired this summer as its fifth president, replacing Tim Hynes who retired. Under a new agreement effective this semester, Southern Crescent Technical College students who successfully complete their Associate of Applied Science in Paralegal Studies will be eligible to be admitted to Clayton State University and transfer considerable credits to earn a Bachelor of Science in Legal Studies. The first full day of classes is Monday, Aug. 9.

Humanities Hall, built in 1875 on its Oxford College campus, has been renovated and reopens this month with extensive technology for film and media studies, a film viewing room and faculty offices. Emory has a new building in downtown Decatur for nursing learning, innovation and community engagement. On its main campus, the Rollins School of Public Health has launched a certificate in climate and health. Emory’s law school is enhancing its curriculum with a new concentration in health law. Acclaimed legal scholar and social justice advocate Darren Lenard Hutchinson will start this fall as the inaugural John Lewis Chair for Civil Rights and Social Justice. Classes start Aug. 25.

The college has made renovations to its student housing. It’s also started a program for students to drop off items for financially-struggling classmates in need. 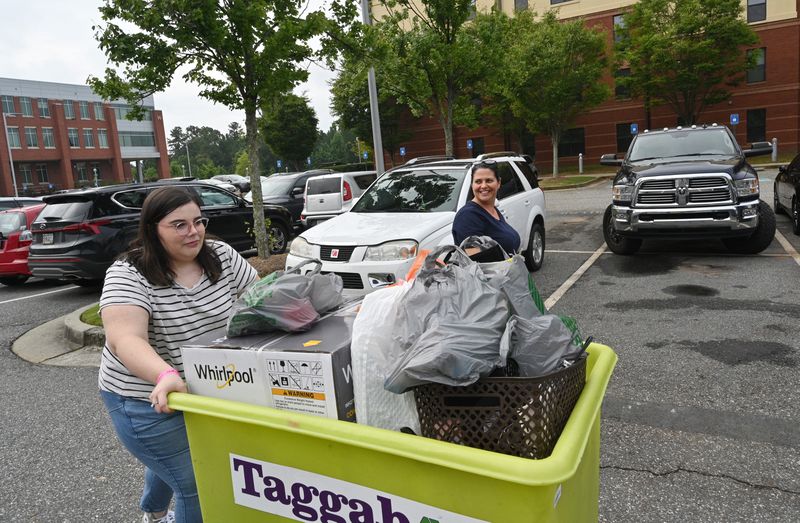 Isabel Rodriguez-Gonzalez, sophomore at Georgia Gwinnett College, helped by her mother Marieuly Gonzalez, moves into her dormitory room at Georgia Gwinnett College in Lawrenceville on Tuesday, August 3, 2021. Isabel Rodriguez-Gonzalez didn’t live on campus last year and like many first-year students missed out on the college freshman experience.(Hyosub Shin / [email protected])

The college is doing its “March Through the Arch” for sophomores since the event was postponed last year due to the pandemic. Classes start Aug. 9.

The college is starting a Residential Building Design Technology (RBDT) associate degree program, which will be completely online to prepare students for careers in industries like architecture, building design, drafting and construction. 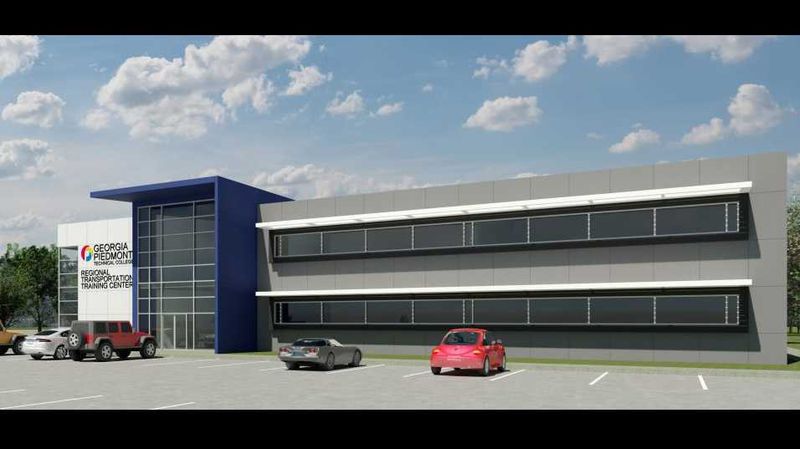 This rendering shows a planned Regional Transportation Training Center that will be built in Lithonia for Georgia Piedmont Technical College. PHOTO CONTRIBUTED.

It also plans to begin construction this year on a regional transportation training center in Lithonia that will house programs in areas such as commercial truck driving, diesel technology and automotive technology. The center is scheduled to be open by 2024. Classes start Aug. 16.

M. Brian Blake is taking over as the university’s president, replacing Mark Becker who stepped down after 12 years on the job. The university plans this fall to open The National Institute for Student Success, which will help other colleges and universities explore strategies to work with their students complete their coursework. Georgia State has replaced Kell Hall with greenspace it hopes will be its signature gathering space on its Atlanta campus. Classes start Aug. 23.

Georgia Tech has created a new department — Tech Dining — which will handle all dining services on campus. A new culinary team has developed new menus focusing on authentic international flavors and expanded vegan and vegetarian dishes. 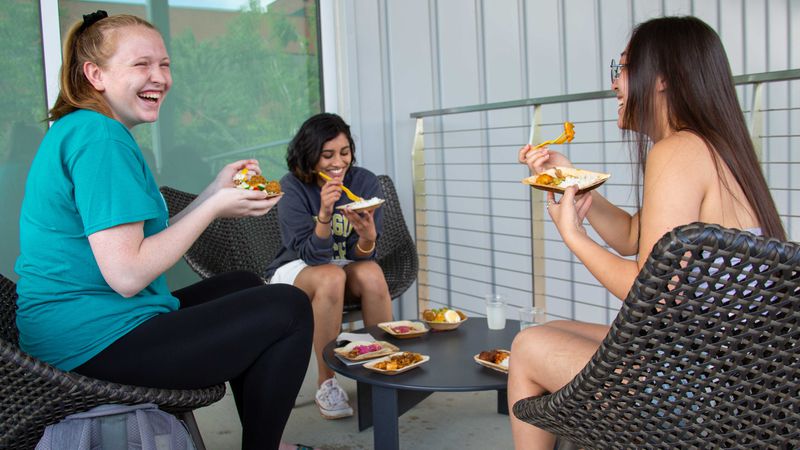 These Georgia Tech students try some of the new dishes that will be available through the school’s dining services. PHOTO CONTRIBUTED.

Howell Hall, the oldest residence hall on either campus, underwent a major renovation and will be reopening this fall. Kathy Schwaig, previously KSU’s provost and senior vice president for academic affairs, is the university’s interim president after Pamela Whitten became Indiana University’s president. KSU has launched a Office of Intellectual Property Development for researchers looking to advance their discoveries. Classes begin Aug. 16.

The college has started a Bachelor of Arts in Journalism in Sports, Culture, and Social Justice. Students from fellow Atlanta University Center Consortium member institutions Clark Atlanta University and Spelman College can cross-register to take Morehouse journalism courses as electives. Porsche Cars North America, Inc. has launched a new scholarship for business majors. The college is requiring students, employees and faculty to receive a COVID-19 vaccination to be on campus, unless they receive an exemption. Classes begin Aug. 18.

There are a few new faces on campus on its campus this academic year. In May, the school hired Dr. Joseph Adrian Tyndall as its executive vice president for health affairs and dean, reporting directly to its president, Dr. Valerie Montgomery Rice. Tyndall will be responsible for the day-to-day operations of the academic programs, its strategic plan and Morehouse Healthcare. It also hired Dr. Walter Conwell as its chief diversity and inclusion officer. The school began a fundraising campaign to enroll and train more Black doctors. Classes start Aug. 23.

The college is expanding its academic programs as it continues to work on regaining its accreditation. Chick-fil-A recently donated $500,000 to the college to train students in a two-year leadership development program aimed at preparing them for a career in hospitality and organizational leadership. Atlanta-based Edible Arrangements announced a few weeks ago it is partnering with the college on its hospitality program. Construction is scheduled to start this fall on a campus hotel where students interested in becoming entrepreneurs will be trained will in hospitality courses. Classes start Aug. 16. 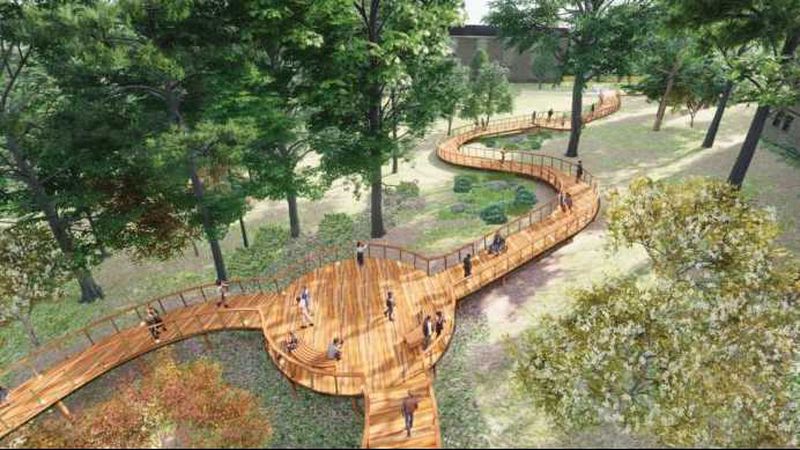 Oglethorpe University has opened the Schall Woodland Walk. It allows the entire campus community to use the same common path of travel from the academic quad to the campus center and residence halls. PHOTO CONTRIBUTED.

Goodman Hall has re-opened, transformed into a new residence hall. The college has expanded music and performance space by renovating a portion of historic Lupton Hall. Classes start Aug. 30.

The school is developing a mixed-use development at 1470 Spring Street, totaling 384,000 square feet, that includes its largest main stage theater, a new bookstore classroom and studio space. SCAD decided to sell its Midtown theater SCADShow to Gainesville-based megachurch Free Chapel. It will have a new professional presentation studio that will offer workshops, one-on-one coaching and other events. The fall quarter begins Sept. 13.

The historically Black women’s college allowed a limited number of students on campus last semester. This fall, Spelman is requiring students, employees and faculty to receive a COVID-19 vaccination to be on campus, unless they receive an exemption. Artist, curator and museum professional Liz Andrews is the new executive director of the Spelman College Museum of Fine Art. It’s starting an online teacher certification program for educators in grades 6-12 teaching chemistry, English, history, mathematics, physics or political science, or pre K-12 music or Spanish. Classes begin Aug. 18.

Georgia’s flagship university has been doing a lot of construction and renovation on its Athens campus. The work includes renovations to its Journalism MFA film production studio, a $3.75 million project. They’ve made improvements to its Veterinary Medicine Anatomy Laboratory. UGA is planning several events specifically for sophomores since they had fewer in-person classes last year and didn’t get the traditional freshman year experience. Classes begin Aug. 18. University of North Georgia nursing students work in the new simulation lab inside the renovated Health Sciences building on its Gainesville campus. The simulation lab resembles real hospital rooms including a labor and delivery room. All are equipped with human-style simulators that can talk, blink, and cry. PHOTO CONTRIBUTED.

UWG established the School of Communication, Film and Media on July 1. It also has a new home for its Richards College of Business. There are new leaders for innovation and research, the Richards College and a new vice provost. UWG Football will return to the gridiron on Sept. 2 after not playing against any other schools last year. Classes begin Aug. 11.