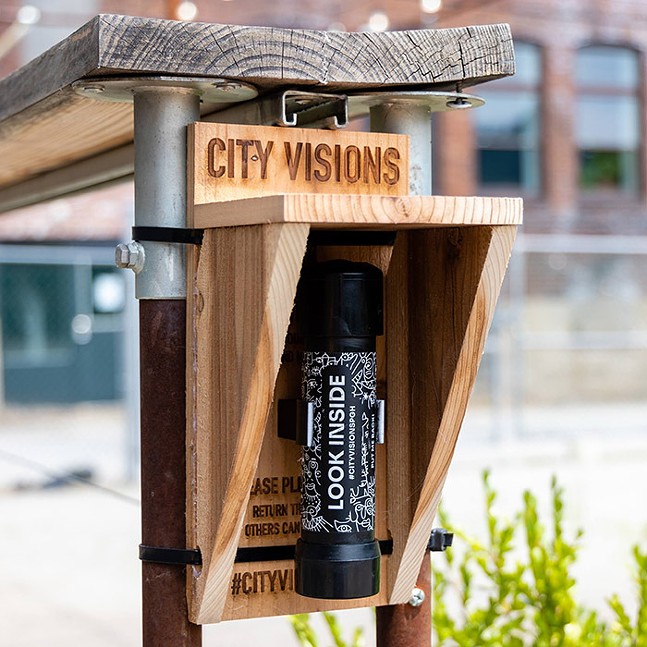 A local artist wants to encourage Pittsburghers to view the city in a new light with an upcoming project.

Thomas Van Hout, a self-described conceptual artist and experience designer, is starting City Visions, a public art exhibition distributing 50 teleidoscopes all over the region for people to find and enjoy. A teleidoscope is like a kaleidoscope, but instead of using glitter and glass inside the tube, the teleidoscope employs mirrors to transform everyday surroundings.

Van Hout, who recently moved to Pittsburgh from North Carolina, claims he got the idea for City Visions in 2018 after working with SwingbombSF, an anonymous collective that installed 50 swings across the San Francisco area.


“One of my collaborators on the project had the idea to replace those sightseeing binocular things with kaleidoscopes and the idea for City Visions evolved from there,” he says. “It’s been bouncing around in the back of my head for three years and now it’s finally time for it to become a reality.”

He adds that his work “highlights the impact of perception and perspective and investigates the subjectivity of the human visual process.”

Van Hout says he has a background in biomedical engineering, but after a couple of years in the field, he was ready to try something new. For six months, he traveled the country in hopes to discover what he really wanted in life, and found that art was what truly moved him.

By coincidence, his artistic journey started in Pittsburgh when he saw the permanent James Turrell installations at the Mattress Factory. From there, he says he ended up in San Francisco and started experimenting with projects.


If you’re interested in the project and would like to see a teleidoscope in your area, you’re in luck. Since Van Hout is still new to Pittsburgh, he’s crowdsourcing possible locations using an online form. The majority of the scopes will be placed by August 14, so if you’d like one where you are it’s better to act fast.

“I hope that people will see their world as a work of art and that there is unexpected joy and wonder to be found,” he says. “I hope it also brings people to parts of the city they haven’t visited or they return to old paths with new purpose. On a personal note, I hope this project introduces me to the city and that I can have a positive impact on the culture.”